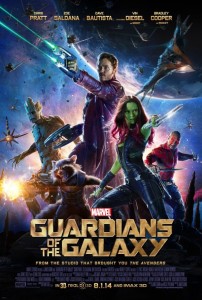 Full disclosure: Any movie that begins with the title card “Earth 1988” has basically won me over from the get go.

However, add to that auspicious beginning an ever-present soundtrack of AM gold radio hits, healthy doses of action and humor, and substantial characterization built up along the two-hour runtime, and Marvel’s Guardians of the Galaxy quickly turns into the film equivalent of a summertime joyride for all, windows down and radio thumping.

Director James Gunn, best known for his quirky cult horror film Slither, does masterful work here, simultaneously handling the heaviest cosmic plotlines of the Marvel Universe while also fully embracing its goofiest elements. He somehow takes the two most challenging strands of Marvel’s canon and fuses them into a concoction chock full of energy and wit. By all accounts, a big budget movie featuring a tree and talking raccoon should have been Marvel’s “jump the shark” moment. Instead, Gunn delivers a broadly enjoyable movie that marches to a beat all its own.

At its heart, Guardians of the Galaxy is a team movie, but one in which two-fifths of the team are CGI characters. Gunn, who also co-wrote the film’s script, puts the spotlight on a talking tree named Groot and an anthropomorphic raccoon called Rocket and yet somehow makes them both seem real and relatable. Gunn conducts the rest of the sprawling film with the same eye for character, and it’s that unwavering focus that makes Guardians work. For what is ostensibly a science fiction romp, Guardians of the Galaxy serves up ample amounts of earthy mass appeal. In fact, this may be Marvel’s most engaging picture since the original Iron Man.

The appeal of Guardians isn’t limited to its raccoon and CGI tree-creature effects. The film’s human leads also connect in a big way. Chris Pratt makes the jump from TV’s Parks and Recreation into the role of full-on leading man without missing a step. As the spacefaring Peter Quill (Codename: Star-Lord…but nobody picks up on this), Pratt channels equal parts Indiana Jones and Will Smith to produce a rare combo- a convincing action hero with a silly sense of humor. Pratt’s charm and no-luck bearing make him an easy character for audiences to latch on to,  even as the main plot takes flight to sci-fi heights. And as he  ridiculously busts a move to the sappy sounds of yesteryear, we can’t help but tap our feet along. Pratt’s all-in and that level of commitment shines through in his performance.

Zoe Saldana brings a confident swagger to her role as Gamora, a trained assassin with a dark past. Saldana projects an edge of danger and also a sense of wounded loss. Her character’s journey holds equal sway with Peter Quill’s own and in terms of performance, Saldana’s strength and focus serves as a great counterpart for Pratt’s goofball persona.

Former wrestler and mixed martial arts fighter Dave Bautista even shines under James Gunn’s direction. Bautista’s musclebound Drax the Destroyer serves as the team’s enforcer and also has a propensity for only taking things literally. Bautista not only weighs-in substantially during the film’s action scenes, but also has some of the biggest laughs. Gunn coaches a deft deadpan delivery from Bautista and it is perfect.

The film features not one but two scene stealers in the form of Rocket, voiced by Bradley Cooper, and Groot, voiced by Vin Diesel. Rocket is a feisty and world-weary bounty hunter who also just happens to inhabit the corporeal being of a raccoon. Rocket is spunky and gritty but also shown to be highly intelligent (he’s the mastermind of nearly all the team’s plans) and has several scenes of real emotion and depth. Marvel is sure to sell a lot of Rocket plush toys and action figures, but his character is surprisingly well-rounded.

Alongside Rocket is Groot, who only speaks three words– “I am Groot.” Even with the limited vocabulary, Groot holds his own with the loquacious Guardians, speaking with actions rather than words. Groot has a strange and mysterious makeup that Gunn explores in several intriguing and visually interesting ways throughout the film.

The phantom team member of Guardians of the Galaxy is its soundtrack. A pulsing and surprisingly present mix of funky AM hits from the ’70s drives the movie along and also gives it its own unique energy. Featuring songs like “Come and Get Your Love” by Redbone and “Hooked on a Feeling” by Blue Suede, Guardians immediately stands out from the Hollywood blockbuster pack with a unique energy all its own.

The soundtrack doesn’t come without meaning, though. The tunes are delivered via Pratt’s character’s “Awesome Mix Vol. 1”, a cassette tape that serves a last remnant from his life on Earth and a connection to his mother, lost to cancer years earlier. The songs on the mix tape round out the character of Peter Quill and also define him. The music also brings the diverse cast of characters together and forge bonds between them. The closest equivalent to what Gunn does with the soundtrack is something like Quentin Tarantino’s Jackie Brown. It’s hard to recall a big studio movie that’s employed pop music in such a way.

Guardians of the Galaxy marks Marvel’s entry into full-on outer space sci-fi, yet it may be one of their most grounded and accessible adventures yet. Funny without feeling frivolous, cosmic in scope yet anchored by real characters with complex backstories and extremely human motivations, Guardians is a juggling act that on paper doesn’t seem like it should work. Buoyed by James Gunn’s direction and the nonstop charm offensive of its diverse cast, it not only pulls it off but does so in a way that seems exceedingly natural. Of course a space battle works set to “Go All the Way” by Raspberries. Of course.  It’s a funky blend of sweet ’70s music, ragtag characters, and sci-fi action that somehow coalesces into one of the year’s most enjoyable movies. In a multiplex landscape rife with BRAAAMS and grim ‘n gritty bleakness, the message from Marvel to moviegoers seems to be a simple one: Come and get your love.