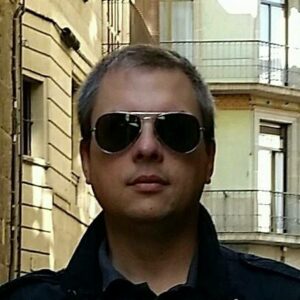 Erik Radvon is a writer from Massachusetts with a background in journalism, comics, and technology.

The 2009 Worcester Magazine article “Hackertown” by Erik Radvon was adapted for television by Discovery Networks and the Smithsonian Channel in 2012, airing worldwide as part of the popular series “The True Story.” Read more here.

In 2018, Erik contributed two features to the legendary magazine Famous Monsters of Filmland (issue #290) covering the 30th anniversary of John Carpenter’s THEY LIVE and the 35th anniversary of RETURN OF THE JEDI. Learn more here.

In 2019, Erik returned to the pages of Famous Monsters to cover the 40th anniversary of Ridley Scott’s ALIEN in issue #291.

In 2021, Erik Radvon captained the massively successful LadyDarke comic book project on Kickstarter. A new comic book action adventure series from an international team of artists and creators, LadyDarke gained fans and backers from around the globe and finished its campaign over 200% funded. Learn more about the smashing success of LadyDarke here.

Erik has also written stories published in several anthology projects, including “Mantua County” in Shakespeare Shaken (2012), “Generation Nirvana” in The 27 Club (2015, Harvey Award Nominee for Best Anthology) and “The Call Up” in Colonial Comics Volume II, New England, 1750-1775 (2017), and “A Lonely Place of Trying” in Pros and (Comic) Cons from Dark Horse Comics (May, 2019).

He also wrote and programmed the text adventure video game Castle Doomenstein(2016) and gained notoriety for popularizing the “Localize Mother 3” movement via a sign at a WWE wrestling show.