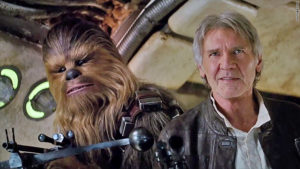 When Han Solo and Chewbacca appeared together on screen for the first time in over 30 years via last week’s new Star Wars The Force Awakens teaser trailer, it took Harrison Ford just a single line to bring an entire generation to its emotional knees– “Chewie,” Ford’s aged voice uttered in gravely undertones, “We’re home.”

It’s a short moment, but it puts a strong punctuation mark on Disney’s reboot of Star Wars, purchased from series creator George Lucas in 2012. The characters are clearly back aboard the Millennium Falcon, as are the actors playing them– meaning this is not a green screen effect, not an ethereal CGI backdrop, but rather an honest-to-goodness handmade stage, a real place where real people can stand. Just like we remember it.

We’ve been here before, of course. 1999 gave us a false-start version of “a new Star Wars.” The problems with The Phantom Menace and the following prequel movies are numerous and well documented, but despite the clunky and soulless execution, the prequel trilogy may have been conceptually doomed from the start. Telling a story in which we already know the end outcome is tricky to pull off even when everything goes right.

A decade after the prequels wrapped and put an unsavory coda on Star Wars, we’ve come full circle. Kathleen Kennedy and JJ Abrams keenly understand the nostalgic draw of our favorite films, the magic pixie dust on film that keeps us coming back to movies like Star Wars over and over again. What they’ve shown of their reboot thus far has been right on target. This is what the masses lined up for in 1999, what’s been dreamed about and yearned for since the credits rolled on Return of the Jedi in 1983.

It took 30 years, a major Hollywood transaction, and a few script rewrites, but the unexpected return of Star Wars to theaters is mere months away. The two teaser trailers haven’t shown us much plot, but what’s been delivered in terms of energy, tone, and feeling– actual human feeling– has been enough to bring people around the world to rapturous tears. This feels like “new Star Wars”, this time thankfully for real.

I was born in the early ’80s and from my experience I think it mostly holds true that my generation is a bit lost. It’s understandable– read any newspaper or magazine article charting the downfall of Western Civilization and almost every measurable societal metric takes a turn for the worse right around the time we were born. We were 10 when the Soviet Union fell, came of age during the crazy ’90s, and watched it all fall apart on 9/11. We’ve survived economic booms and busts, got tattooed and pierced, dyed our hair until one day there was no hair left to dye. We dialed in to AOL and now have Twitter and Facebook on super computers in our hands. We grew up, sort of. Some of us grew jaded. But we never stopped holding out hope that through the garbage chute of the early 21st century something better might be on the other side. In any case, we’re along for the ride.

Where a large segment of this lost generation, sandwiched between Boomers and Millennials,  finds itself is almost entirely through the vehicles of pop culture, and Star Wars is the central hub. Star Wars is our fairy tale, our legend, our communal cultural mothership. Every Game of Thrones watch party, every Marvel movie success, every feat of wacky imagination taking hold and finding success in a world that’s rapidly turned ugly owes a debt to Star Wars. It’s the rallying point for barristas and barristers, dropouts and doctors alike. It’s inspired a staggering number of creative individuals to put pen to paper (or stylus to tablet) and embark on their own endeavors, creating their own worlds of imagination. Star Wars made it ok to feel, to think, to wonder.

This misfit patchwork generation watched the new trailer with spouses and children, in office cubes and empty conference rooms, in between bar shifts and studying for degrees. We uploaded reactions online, shared with friends new and old, or maybe just smiled in private. If you’re like me, you might have sent the link to your parents for reasons completely unfathomable and absurdly saccharine.

Tears were shed. Emotions poured out. Yes, over something as silly as a wookie and a spaceship. But anyone who knows Star Wars understands it’s so much more than that.