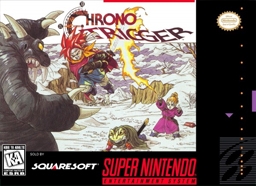 Time is a weird thing. It’s the most mysterious force in the natural world, it’s existence perhaps nothing more than an illusion spun by our monkey brains to make sense out of the swirling universe we find ourselves staring at, bleary eyed and confused.

Twenty years. Twenty spins of the rock we call Earth around the hydrogen fireball we call the Sun.

Twenty years ago, I was riding the school bus, smuggling a copy of GamePro magazine in my backpack stuck between math texts and ratty Mead spiral notebooks. In the issue was a an extensive preview of Chrono Trigger, a new Japanese role playing game (RPG) coming for the Super Nintendo.

I thumbed through the handful of pages with an intensity bordering on obsession. What stuck me first and foremost was the artwork that accompanied the game screenshots. Chrono’s hair was spiky and stylized and awesome. There was a frog in armor with a sword. The fusion of hand drawn art and (at the time) cutting edge technology and maybe the unmistakable Japanese-ness of it all enveloped me. I closed my eyes on the long bus ride, lost in a rich imaginary  world of steampunk warriors and pixels and magic.

That’s the legacy of Chrono Trigger, I think. It’s a wonderful product of imagination that in turn spurns one’s own imagination. In the years since its release the game has been routinely included on critical lists of the best video games ever made, and its cult following is approaching mainstream. Chrono Trigger has become almost a rite of passage, passed on from gamer to gamer and played on everything from old cartridges to scratchy discs to smartphones or bootleg emulators. People keep finding ways to play Chrono Trigger however they can, and in the two decades since its release it’s never really gone away.

I didn’t know it in 1995 but Chrono Trigger was almost destined to become a classic, and a once-in-a-generation kind of experience. Chrono Trigger was made be three giants of Japanese video game and comics culture: Yuji Horii, creator of the best-selling Dragon Quest series, Final Fantasy creator Hironobu Sakaguchi, and self-made comic artist Akira Toriyama, whose Dragon Ball Z would go on to become a global phenomenon shortly after Chrono Trigger’s release. It was a dream team of talent, and the final product shows.

Twenty years on the charm and uniqueness of Chrono Trigger holds firm. Graphics have gotten better, music has grown to full orchestral scores, battle mechanics have advanced to complex, multi-faceted systems. Games are played online and on tablets and kids on school buses probably don’t read many print magazines. But the magic holds. The charm remains. The world of Chrono Trigger lives on– then, now, and for as long as electrons can be beamed onto screens and imaginations seek to explore the dreams of time.