I’ve followed American politics since before I could vote, finding it exciting and captivating, sometimes even fun. I naively and mistakenly thought I was accustomed to all the various tricks the murderous bloodsport had to offer, its unpredictable lurching, its penchant for absurd twists and turns. I should be used to it. The first election I participated in was the 2000 presidential contest, a pageantry of farce that ended in a protracted limbo and the Supreme Court selecting a winner. Looking back, it was a fitting baptism for the era in which we now live. Yet somehow the insanity of the present moment still manages to shock and surprise me.

After the soul-scorching experience of the Bush Jr. years and the icy Cold Civil War of the Obama years, the passion I had for politics evaporated. I think it was a reaction beyond my control, a revolt of cells and DNA, forcing me to turn away in some primal act of self-preservation. It just got too crazy. We were so beyond any sense of normalcy, the tetherball string had snapped and the ball flew over the fence. Game over.

I had no idea how much crazier it could get. Here we are in what feels like a mirror-universe, a comic book alternate universe of

It’s not just limited to one candidate or party, the entire field is deep into Twilight Zone territory this year. Marco Rubio, son of immigrants, routinely bashes foreign workers (like his parents). Say what you will about Trump’s insanity, which is very real and present, but the insidious absurdity of Rubio’s entire existence makes my brain feel like it’s been put through an industrial grade food processor. Only in America could sons of immigrants like Cruz and Rubio grow up to someday run for president on a platform of denying other immigrants the same experiences afforded to them.

Trump, this beautiful American monster, is the physical incorporation of every skeleton still hanging in the closet of United States cultural history. He’s our Candyman, given form by perverse and arcane mirror-chanting arising nationwide. The mass ritual began shortly after 9/11, an almost understandable reaction to fear, and it went into hyper-growth mode after Obama was elected. Now the portal has ripped open, and the beast is here, lumbering wildly and screeching with the sound of a thousand terrible trumpets. Woe be upon those who stand beneath his many cloven hooves.

The thing is, you can’t overstate how much Americans love being told they’re winners, or are at least in the running to be winners. We like to rack up them wins. Trump’s keen channeling of this, his fist-pumping bravado, is a deep and lasting thread in our culture. It’s not even political, it’s a channeling of the mystical energy of the nation that created Robosaurus. Tickets are cheap, everyone can get in and witness this big show. He might win it all, the first monster truck rally president.

New England remains a strange little pocket of relative calmness amidst the US hurricane, a perch it tends to cling to somehow. Vermont, New Hampshire, and Central and Western Massachusetts are cultural cousins, cut from the same cloth of town meetings and a sort of dichotomy of concern and benevolent detachment from our neighbors. The people here have a deeply held desire for their communities to do well, mostly so we don’t have to hear about other people’s bullshit problems. Please, for the love of God, let us have peace. Pay the guy at Dunkin Donuts a good wage so I don’t have to deal with him not having car insurance when he rear-ends me. I think that’s the core of the central New England spirit.

On the homefront here in Central Mass, this is Bernie country (and Trump country, but I’ll ignore that). It stands out from Hillary country in a number of ways. On the map below, you’ll notice that Bernie won towns with trees, squirrels, rolling vistas that spurn an existential belief in the supernatural. Hilary won towns with lack of parking, overpriced Indian food, and an overriding smell of urine. For some reason every affluent town in Massachusetts smells like pee. It’s the strangest thing that there’s this reputation of high culture spinning out of places like Wellesley and Harvard Square. Those places are cesspools of Master’s Degrees and bodily waste.

Out here in Bernie country, the Good Lord truly smiles upon us. Our cars have places to rest called “parking.” We have indoor plumbing, and it is used frequently. Our Indian food is plentiful and super affordable. To borrow from the other side, perhaps a wall is in order. Proposed diagram below: 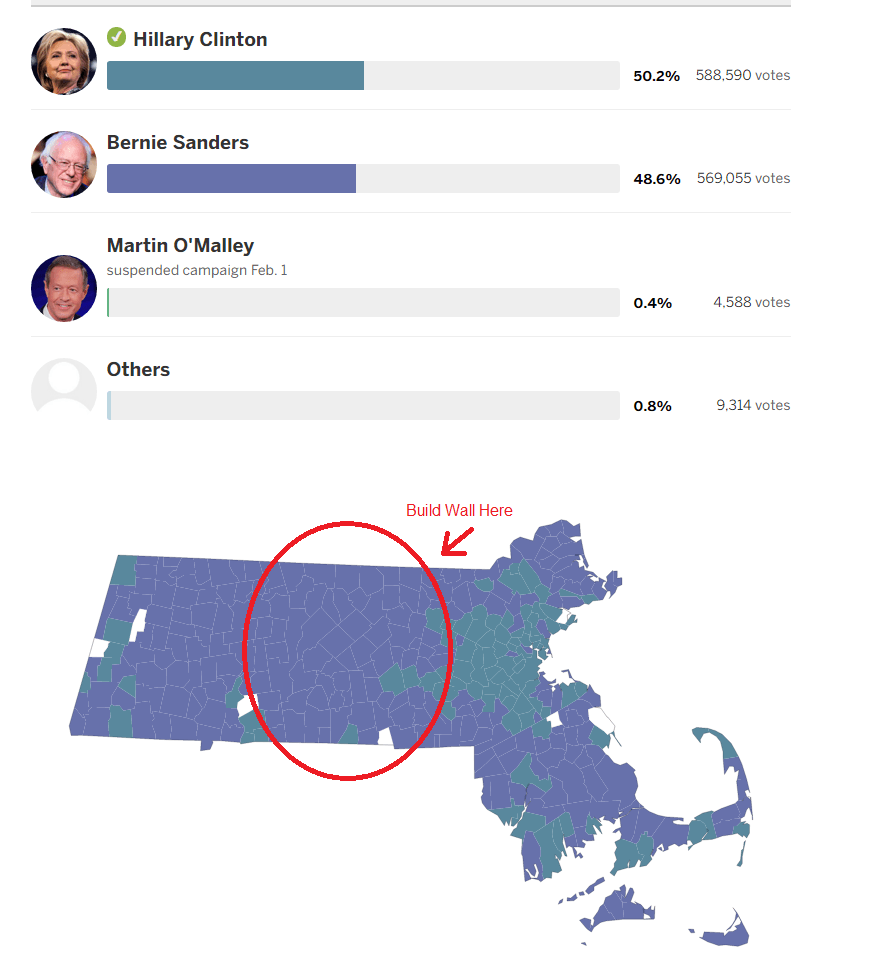 I watched Hillary’s remarks last night, her crowd chanting USA! USA! USA!, something which always fills the air with a kind of menace. I love the US. I’ve never felt the need to shout it like that, and I’ve never really found a situation where it made sense. Maybe a moon landing? I guess I could get behind it during a moon landing.

I don’t have strong thoughts or feelings about Hillary. She doesn’t spurn disgust in me, like she seems to do in so many. I’m not quite there in terms of cheerleading for her, either. I’m sure she could do the job. My grandpa likes her, and I trust his judgement. The big Hillary takeaway for me is that, if elected, it would mark 24 years of my life under the rule of a Bush or a Clinton. 31 if you count H.W. Bush’s VP years. That seems pretty weird. But at this point, what doesn’t?