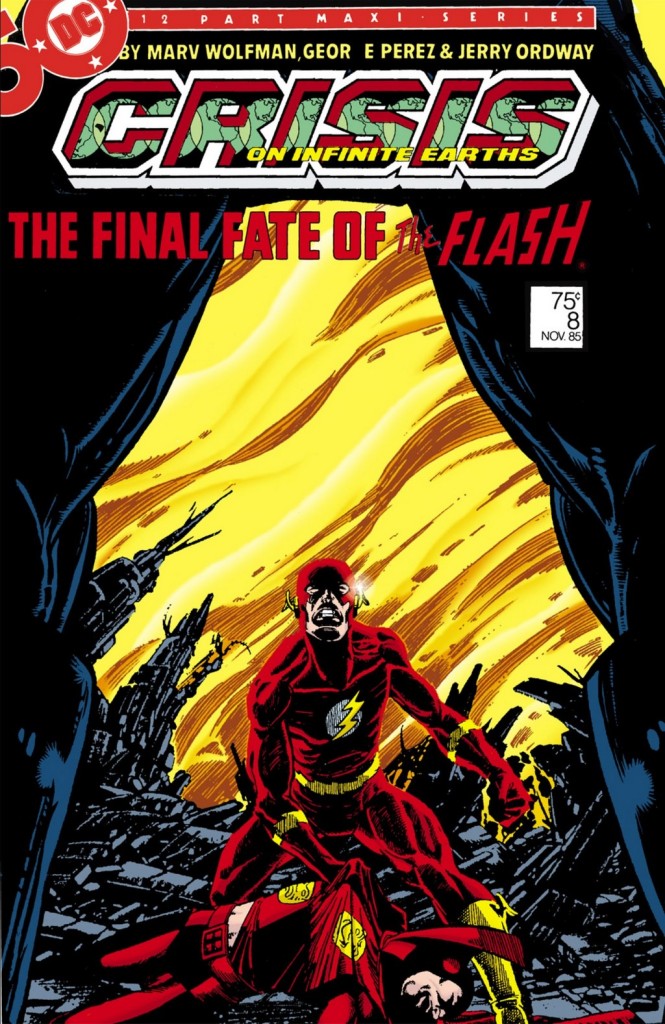 I will never get tired of seeing Barry Allen die.

Blame my age. My comic-reading vice (it’s an absurd habit, really) latched onto my central nervous system sometime in the mid ’80s. From the vantage of 2016, it was an extraordinarily strange time to come into the medium. The X-Men were dead rebels on the run. Batman got old and returned from retirement in a dark future landscape. The DC multiverse was destroyed only to be reborn as a single universe. Spider-Man was infected by an alien symbiote that would eventually turn into his most brutal enemy.

In the world of comic books, we’ve backpedaled on the future. Progress has given way to erosion, and nostalgia is dragging the pulp universes of Marvel and DC into a mummified state.

Hal Jordan. Gwen Stacy. Barry Allen. Ghosts of the past, old fragments of pop culture from the era of our parents and grandparents. They should be entires in the comic book history books. So why are these names known today, let alone featured in monthly titles? Why are we so desperately trying to relive the past?

In the ‘80s and ‘90s, creators took great risks taking comics to new places. Storytelling changed, matured, and took on more complexity. Artwork became more dynamic and exciting. As the art and craft of comics evolved, the characters evolved along with it.

Kyle Rayner. Mary Jane Watson. Wally West. We had new heroes, heroes for the next generation. Strangely, we turned our back on them. They’ve been erased, mutated, and mitigated, all but tossed down the memory hole. We’ve turned our backs on modernity in favor of endlessly returning to and regurgitating the dramas of the past.

Not to be all “9/11 changed everything”, but it kind of did, and I think in the case of our pop culture output it was a seismic and defining moment. It took a couple years for the shockwaves to fully reverberate, but the years afterward marked a strong wave of Silver Age revitalization. It’s a lot less scary to ride a rollercoaster you’ve ridden before as opposed to jumping on something completely new, where the twists and direction are a mystery. When you’re scared, shaken, and battered, you turn to comfort. Few things are more comforting than nostalgia. By affecting the styles and struggles of the past, by revisiting territory we’re already familiar with, we deftly sidestep the most frightening thing of all– the unknown.

So that’s why we see Bart Allen’s Impulse morph into Kid Flash (a name that was stale even in the Silver Age). We see DC’s singular post-Crisis universe discarded for a return of the old Multiverse via a punch from the long forgotten Silver Age Superboy. Spider-Man suddenly must be a bachelor again (because the last 30 years of stories just weren’t working?) and the history with his wife and life partner, Mary-Jane Watson Parker, is blinked out of existence via a deal with the Devil. I wish this was an exaggeration. Even the sacred ghost of the Golden Age, Bucky, returned.

The future is a massive ocean of the unknown, and where we once celebrated those intrepid enough to embark on journeys into the uncharted, we’re now doing little more than hunkering down on the island and gathering around the fire to stay warm and cozy.

Practitioners and fans of this Silver Age fetishism claim many things. They say these characters are returning to their classic roots, going back to basics, distilling what made them compelling and popular into potent new beginnings.

Maybe so. Green Lantern: Rebirth is about as good as superhero comics get, and creators Geoff Johns and Ethan Van Sciver do wonders bringing Hal Jordan back from the most comic book-y, convoluted of deaths and purgatories. It’s a masterclass in rebooting, so much so that the formula was then applied to The Flash, bringing Barry Allen back from the void 30 years after the character’s demise in Crisis on Infinite Earths. Now, DC stands on the brink of applying the Johns’ Rebirth formula to their entire universe.

But the optimism and shine of rehashing the past is at best a temporary reprieve from reality. You can’t outrun the future, or the murky, complexity of the present day. The fact of the matter is Geoff Johns had a hell of a run on Green Lantern following Rebirth, but now what? We’re left very much back where the Silver Age ended. Hal Jordan’s flagship title is barely cracking the top 100, with “big” issues maybe topping the 50 spot. In the end, the character a former test pilot turned intergalactic police officer. How many test pilots do you read about in the 21st century? This is exactly where Green Lantern found itself in the ‘90s, when creators introduced a new hero to take up the mantle. Hal Jordan has had 50+ years in the spotlight. Kyle Rayner got about a decade before the ghosts of the Silver Age overtook him. How many new avenues were left abandoned as a result?

The Flash TV show has brought Barry Allen into the living rooms of millions of people around the world. But is it really Barry Allen? Actor Grant Gustin isn’t the blonde, square-jawed cop Barry Allen of the comics. In fact, Gustin’s youthfulness, vulnerability, and humor are all trademark qualities of Wally West, the character that replaced Barry Allen as the modern Flash over 30 years ago. Here’s what’s been forgotten in this rush to reboot everything to its Silver Age state of being: Barry Allen was boring. The Flash was CANCELLED prior to Crisis. The most exciting thing Barry Allen ever did was die. So yeah, Barry Allen is back in name, but the spirit of Wally is alive and well in the character’s TV iteration. Again, you can’t outrun the future.

Mary-Jane was tossed aside by Marvel comics and Hollywood alike. Nobody born after the Reagan Administration should really care about Gwen Stacy. Yet, here we are, and the current state of things would have you believe she is the most important figure in Peter Parker’s life. Gwen Stacy was Pete’s high school girlfriend. Mary-Jane was his wife. This retrudging of Spider-Man’s high school “glory days” is nothing more than a sad middle-aged male fantasy given enormously disproportionate space to thrive.

When I say kill the Silver Age, I don’t mean forget the rich history of comics or toss it aside. The aesthetics and trappings of the past don’t need to be avoided. Creators like Grant Morrison and Frank Quitely channeled volumes of Silver Age imagery and symbolism, but did so in the name of telling a completely new set of stories in their All-Star Superman. Bruce Timm and Paul Dini took Batman to a world that looked like the past in Batman: The Animated Series, but delivered an entirely unique and new take on the character. James Robinson and Tony Harris performed a sort of prequel to the Geoff Johns Rebirth format with their run on Starman in the ‘90s, folding in nearly every facet of the character’s publication history but doing so with a new hero that represented the time in which we live. The classics are great, but they need to be made relevant to today.

You can laugh at ‘90s comic characters like Darkhawk and Sleepwalker, but an honest look shows their creation sprang from the same energies that birthed Spider-Man and Captain America. At their best, comics are a cauldron of new ideas, put down onto paper with pencil and ink and set into action across the minds of readers. Those ideas should be crazy. They should push the limits of imagination. The worst thing thing a comic book can ever be is safe.

The latest trailer for Captain America: Civil War featured the debut of the new on-screen version of Spider-Man, and sure enough, the Silver Age was on full display. The look and feel of Marvel’s 21st century movie Spidey is far more Ditko and Romina than McFarlane and Bagley, and that’s a shame. By once again turning to the past, we’re robbing ourselves and the next generation of the chance to move forward. In 2016, the truly exciting choice for a movie version of Spider-Man is Miles Morales. Marvel has instead played it safe, extremely safe, by doubling down on the past instead of pressing ahead toward the future. Peter Parker isn’t Peter Pan. He can grow up, and we can grow up along with him.

The most exciting thing Barry Allen did was die and leave the mantle of the Flash in better hands with Wally West. Hal Jordan was more compelling as a twisted, power-mad villain than he had been in decades as a graying, middle-aged member of the Green Lantern Corps. And Mary Jane served as the most important character in Spider-Man history, the lynchpin for which the character’s history pivots from the then to the now.

The past glimmers and beckons with the false promise of known quantities. It makes us feel good to see where the train is going, to know how things ultimately play out. Returning to these comforts make us feel safe. But recycling the Silver Age of yore is really the ultimate sign of cynicism. It represents a lack of confidence in what the future might hold and a fear of going somewhere new and unknown. It codifies a “no future” mentality, but hides the true lessons one could take from that by wrapping it in nostalgia and a sense that the good old days were actually better or more simple than the present. The good old days weren’t any better or worse than today, and they certainly weren’t any less complex than the insane world we currently face. The heroes of the Silver Age were new interpretations of the rapidly changing world at that time. Instead of recycling, resuscitating, and regurgitating those ghosts of the past, we need comics to return to the path of modernity.