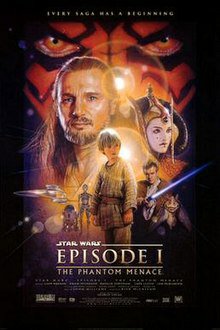 It was released in 1999, but in many ways STAR WARS EPISODE 1: THE PHANTOM MENACE stands as the first movie of the 21st century. It cleared the path for an entirely new way to produce movies, and fought against enormous headwinds from an industry entrenched in a byzantine system of inflexible and expensive analog platforms. THE PHANTOM MENACE transformed movie making forever and established a new set of flexible storytelling tools that today are taken for granted. As you plop down into your seat for AVENGERS: ENDGAME later this week, thank George Lucas for what you’re about to see on the screen.

Twenty years ago, the idea of a movie in which every shot contained a special effect was madness of the tallest order, and the determination of George Lucas to bring his sweeping vision of a grand Republic lurching to totalitarian empire was endlessly derided as the hubris of an aging genius who had attained fantastic success in the ‘70s but had since grown far out of touch. The drum beat of criticism echoes to this day—Lucas was too focused on technology, the story was clunky and flat, too much green screen robs movies of emotion, etc.

Meanwhile, Peter Jackson’s overtly digital Lord of the Rings won best picture, James Cameron’s 100% digital Avatar is the highest grossing film of all time, and the Marvel Cinematic Universe is on a 10+ year run of dominating both the box office and the pop culture landscape like no other, with hardly a frame of its burgeoning portfolio untouched by digital arts. It’s not just popcorn flicks either- digitally shot SLUMDOG MILLIONAIRE won the Oscar for best cinematography. Nobody voting for it had much interest in the infrastructure used on set, rather they were focused on the outcome- a beautifully captured image. Multiple Oscar winner Alfonso Cuaron shot last year’s incredibly beautiful ROMA on digital cameras. As his deeply textured black and white scenes of 1970s Mexico City roll by, is anyone in the audience ever concerned about the lack of analog film involved in the process? It never even occurs to question it. The focus is on the outcome, not the tools.

All of these movies are heavily indebted to THE PHANTOM MENACE and follow the new type of moviemaking singlehandedly established by George Lucas. Lucas created the template for 21st century movies, pushed for the myriad of new platforms and tools needed to make moviemaking more flexible and accessible, and he did it in the mid-1990s when nobody else was even close to believing it was possible or valid. I wonder if the same critics who lambasted Lucas for his digital advocacy have ever even once questioned the use of these same tools by Cuaron in films like ROMA and GRAVITY?

In the 20 years since Lucas took on an entire analog industry, a new generation has grown up steeped in the prequel era, not so much as a follow-up to beloved 20th century movies, but as the status quo for the Star Wars saga. With THE CLONE WARS television show, Lucas perhaps reached the apex of his digital storytelling ambitions. Once again, he created a new way of doing things, one that allowed for far more flexibility, choice, and capabilities for storytellers. Storyboards were replaced by previz and animatics, animation workflows were streamlined and made non-linear, and graphic rendering capabilities evolved from functional to beautiful. THE CLONE WARS carried forward the legacy begun in THE PHANTOM MENANCE and took Star Wars to new heights, extended Lucas’s original saga to truly epic proportions. Today, an entire generation of fans have the digital backdrop of a crumbling Republic and brave Jedis like Ahsoka Tano as their definitive concept of what Star Wars is all about. In a way it was full circle for Lucas. He began Star Wars inspired by short Republic serials, and ended his tenure as a storyteller producing serial-style episodes exploring multiple facets of the universe he created.

Fear of the Future

In a lot of ways, the relentless progress spearheaded by Lucas has been walked back in the 20 years since PHANTOM MENACE. Both JJ Abrams and Rian Johnson opted to shoot their Star Wars entries on 35mm film instead of using the digital platforms pioneered in the Lucas prequel trilogy. Nevermind the fact that ultimately this footage is digitized and presented digitally to moviegoers, and every frame is laden with as many digital effects as PHANTOM MENANCE, if not more. There’s a hipster cool to shooting on 35mm, like listening to vinyl records and using tube amps. That’s fine for those who can afford it, or those who wish to steep themselves in a kind of nostalgia blanket.

It’s not a huge surprise. Global culture as a whole seems to be in a regressive mood right now, extending from politics to art and culture. Generation X, today’s chief filmmakers, have been shuttled into adulthood by Bush v. Gore, 9/11, multiple wars, global terror, economic collapse, and looming ecological disaster. It’s not hard to understand why so many storytellers of a certain age have turned their eyes to the past, a past that seemed more stable, secure, and safe than the present day. STRANGER THINGS is perhaps the best encapsulation of this—while the world is burning, it sure would be nice to be back in the confines of a friendly neighborhood basement playing D&D, riding bikes on safe suburban streets, and playing games at the local arcade. Simpler times, with storytellers seeking simple answers for a world that is increasingly complex and devoid of satisfactory resolutions.
There’s a bizarre attitude about digital filmmaking that somehow persists to this day, with cinema purists claiming that it robs films of a certain look or feel. Taratino loves his old film, as does Christopher Nolan. They’ve cultivated a fetish of cinephiles who seek out screenings of old prints and 70mm projections. In reality, physical film is far past its prime and it’s hard to see how scratches on a print somehow lends anything to telling a story. Like the pops and scratches of a vinyl record, it’s more sensory comfort blanket than actual technical reasoning. The idea that the platform used by a storyteller somehow detracts from the end result is a bit absurd. Are your family photos less meaningful now that you snap them with an iPhone or Samsung Galaxy rather than a Kodak FunSaver camera? In 1999, the world was firmly in the FunSaver camp. Lucas was branded almost a madman for seeing the digital future on the horizon. It all seems pretty silly in retrospect. Is anyone bemoaning the loss of dropping pictures off at the Fotomat kiosk and returning a week later only to find half the roll of film was overexposed, or that pictures from grandma’s visit were out of focus? Who in your family is still operating a basement darkroom and bathing sheets of photo paper in chemicals baths to get an image of a backyard squirrel? In the 20 years since THE PHANTOM MENACE, we’ve all become digital storytellers. And we love it.

A New Hope for a New Generation of Digital Storytellers

The opportunities provided by digital platforms open the world of storytelling up far beyond those who can afford the shooting, processing, and editing of 35mm film, which is basically nobody but a major film studio. With digital technology, a movie can be made with little more than a cell phone and a laptop. This allows for a new kind of flexibility, one that can match the current times and perhaps enable more artists to capture the chaos happening all around them. The surface hasn’t even been scratched yet, and that is exciting for the history of moviemaking as an artistic medium—we might be on the cusp on an enormous explosion of new stories from new voices, especially from a generation that has grown up with iPhones. For the under-20 crowd, powerful and complex digital storytelling tools are as commonplace as microwave ovens. It’s hard to image the mainstream of the next generation going out of their way to spend literally millions of extra dollars to tell their stories for something as ethereal as a “certain feel”, when they have come of age telling digital stories their entire life using a gadget that fits in their pocket. The next batch of movie directors are not likely to be emotionally attached to trying to recreate the look of E.T., or beholden to mid-20th century technology that produced it.

Digitization isn’t a means to rob art of meaning. Quite the opposite- it presents a vastly evolved and more advanced set of tools to make motion picture storytelling available to the masses. Take a look at your phone’s gallery. The quality and volume of the photos and videos dwarf everything your ancestors did on film, slides, and VHS camcorders. Cameras and photography capabilities are major technology components of mobile phones today. Once again, Lucas was there in the 1990s, pushing against an entire analog system entrenched in technology developed 100 years prior, from the studios to the equipment makers all the way through to the local movie theater.

Today, the staccato clacking of the projector is gone from your local multiplex, as are the shaking images, marked up prints, and cigarette burns associated with showing movies off bulky reels of film. When you buy a ticket to see AVENGERS: ENDGAME and plop into your seat, you will be watching the film digitally projected from what is basically a hard drive, with a pristine and crystal clear image and amazing sound. At no point will you be bemoaning the loss of analog projectors or film reels. You’ll be focused firmly on the story unfolding before you.

The quality of the moviegoing experience has increased greatly in the 20 years since THE PHANTOM MENANCE, and that is due almost exclusively to George Lucas. His legacy won’t be Jar Jar Binks dialogue or even Death Star trench runs. Historians will view him as a revolutionary who moved an entire industry into a new epoch, and received jeers along the way for doing so while others collected awards, praise, and accolades using his playbook. It’s hard to feel bad for a multibillionaire, but it’s also clear that the initial assessments of THE PHANTOM MENACE from 1999 are as relevant today as Fotomats and FunSaver cameras. Imagine what folks will make of Lucas’s prequels 20 years from now, or 100? As a wise Jedi master, once said, “Always in motion, the future is.” Those words ring true, whether from a physical puppet or a digital one. That’s the lesson THE PHANTOM MENACE continues to deliver.

The author skipped school to see The Phantom Menace three times on opening day in 1999.