As a nerdy reclusive teenager from Massachusetts I made for a strange transplant to the wilds of Central Florida. Where I ended up on the outskirts of Orlando in the early ‘90s was more Dixie than Disney, and a level of raw violence permeated the humid air. The kids in my neighborhood were a curious blend of fellow transplants, mostly from places like Alabama, Georgia, and Tennessee. White, Black, Asian, native, immigrants all cruised the sun-worn pavement stretching from subdivision cul-de-sacs to clustered trailer parks. The popping and clacking of nail guns on plywood provided a constant ambient soundtrack of new construction, mixing in with the droning of frogs and palmetto bugs from the nearby swamps.

I was weird, into comics and role playing games and computers, northern hobbies fostered during long snow storms and icy springs. But Florida was infinitely weirder. It struck me almost immediately as inhospitable, and I couldn’t really understand how humans had come to live in such a place. It all felt so obviously doomed, with fire ants on every stretch of manicured lawn and a sun that acted more like a death ray than a life-giver. It seemed like a mistake for anyone to be there.

The kids in the neighborhood welcomed me with a blend of cold indifference and white-hot scorn. In today’s language I guess you’d say I was “bullied”, but really it was just humanity laying itself bare for what it is. People not being horrible is more of an aspiration than a reality, and that’s what I encountered. I very much dreaded the time at the bus stop, and very much relished the moment the door home shut behind me in the afternoon, the cold rush of A/C telling me “You made it.”

The kid across the street from me, Daryl*, was the son of an Iranian immigrant and an American mom. His parents were so soft spoken and kind. Daryl was the complete opposite, dark and full of rage, constantly saying and doing the worst things possible. I suffered his taunts and insults daily, until they became just more noise alongside the construction and prehistoric bugs and low-riders with house speakers in the back.

One day the kid Daryl hung around with most unexpectedly complained to the school administration that Daryl was, well, Daryl, and lodged a report of “harassment.” For some reason Daryl sought me out with this news. I may have been a lot of things- a dork, a bad dresser, no athletic ability, no social graces- but I sure as hell wasn’t a rat. Based on that alone we fell into a groove of hanging out together in that weird way created by proximity and shared living experiences. I never felt like he liked me, and I never felt like I liked him. But there we were. Friends.

As time went on Florida began to creep into my DNA and change me. I abandoned my Kmart clothes and fell in love with skate-surf brands from hallowed land of the mall like Stussy, 26 Red, Mossimo, and No Fear. I shaved my head. I got a Mongoose Expert BMX bike. Daryl and I rode everywhere, steeling chrome valve stem covers off Mercedes’ parked at church and putting them on our bikes, displaying them like scalps salvaged from a hard-fought war. We played basketball every day. We threw rocks at metal sheds just to hear the bangs and laugh. We rode next to the beleaguered ice cream truck man, kicked the side of his faded van and threw ourselves onto the road, claiming he hit us and that he better give us free ice cream or else we’d sue the shit out of him (it rarely worked). We cut our bikes across four-lane traffic, cars beeping and rednecks screaming out their monster trucks, and us, no hands on the handlebars, whistling. Fuck ‘em. Fuck ‘em all.

Daryl’s fixations in life were jetskis and stereo systems, the later of which I also appreciated. He had a badass Pioneer receiver and a nice set of speakers, alongside a CD-changer and an equalizer. We would play music for hours, alternating from his picks to mine- Regulate by Warren G, then Buddy Holly by Weezer. N.W.A., then Offspring. And so on.

Somehow Daryl caught wind of the video game Doom and wanted to play it. Doom was a sensation when it landed in 1993. Kids in school passed around copies on 3.5 inch floppy disks like it was an illicit substance or adult video. I sucked at sports, I was charmless to girls, and I got into dumb fights for no reason but this was something that I had a tangible skill in.

My grandfather was big into personal computers and electronics. He was a retired cable company engineer and always kept busy. We had a dedicated “computer room” in the house, with rows upon rows of computer equipment, caseless and exposed motherboards with wires and cables hanging off racks. Every day was a new challenge- partition this hard drive, figure out why this memory wasn’t working, correct this BIOS issues, replace this battery, etc. We went to computer shows at convention centers and scoured for parts and shareware disks and CD-ROM compilations, we had stacks of phonebook-sized Computer Shopper magazines, piles of drives, baskets of wires and connectors and old processors. I knew computers almost as a natural extension, and spent far more time building and programming them than the average 13 year old.

“Yo, can you get me that Doom?” Daryl asked one morning while we waited for the bus. I was kind of surprised he even knew what it was.

I told him yeah, no problem.

I brought my disk over to his house that afternoon and installed it on his family’s functional but aging 386.

“Damn E, I knew you were smart but I didn’t know you were a fucking genius,” Daryl said, watching me navigate DOS and creating directories for the game’s files.

Somehow I gained a modicum of respect. I was still a dweeb, but I had the computer hookup. And now Daryl had his Doom. I delivered. The game taxed his family’s PC and ran at a stuttering clip, but it was good enough. The chainsaw whirred and slashed into demonic imps, the shotgun choked and blasted with visceral power. Daryl swearing and shouting racial slurs, with each hallway run and surprise attack. Doom was dark and violent and looked great, satisfying the key requirements of Daryl and basically all of ‘90s youth. 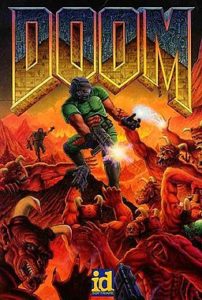 I moved back to Massachusetts at the start of high school and was mostly glad to be gone from the place. Daryl wrote me a letter, which was surprising. I saw him again about a year after I moved when I was down in Florida visiting my mom. In youth years that’s something equivalent to a decade. He already seemed much older. He was drinking 40s and hanging with a rougher crowd than our regular hood offered. It was an odd meeting. I went back home feeling relieved not to be in that place anymore. I was happy to free of Florida and focused on my new/old life back north, high school, the future, etc.

As time plodded on and I somehow became an adult (What? How?), that era kept sneaking its way back into my thoughts, until it got to the point where I started to really understand the maelstrom of those times as something completely different from how I originally classified them. I began to smile a lot more thinking back on those days. I began to appreciate it for its unique strangeness, for how completely different everything was from this slow-motion apocalypse we’re now living.

I looked up Daryl’s name late last year in hopes of reconnecting, having a beer, talking about getting older, commiserating and laughing. I was shocked to learn he had passed away. Far, far too young.

My grandfather’s gone now too. It seems the circle of people who will even understand what I’m talking about, who will even know what it means to slap a floppy disk into a drive and install a shareware game and work to disable a memory stacker so that it runs correctly and re-run setup to get the Ad-Lib to work, that circle grows smaller by the day.

For some reason I’m still here, with these memories, these stories, these shards of time swirling around me like laughing ghosts. I feel compelled to talk about it, unsure if anyone will really get it or even care. I do it for me I guess. To remember.

I still play Doom. Back then we thought it was just the beginning and we endlessly theorized about what the future would bring, but really it never got any better. We had all we needed with a chainsaw and a shotgun and VGA cyberspaces to project our psyches into. Installing Doom was not a one-time thing. It was for life.

*Changed name out of respect for the dead and the family.