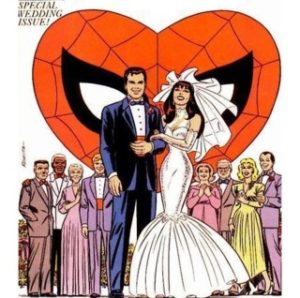 I say this as a reader who came into funny books in the mid-80s, buying them off wire racks in grocery stores and pharmacies—pre-Internet, pre-Hollywood—when it was just newsprint and ink and imagination held together by staples.

Peter was already older when I met him. He was at the tail end of college. He was capable and respected as a professional photographer, distant from the angst of trying to find work and moved on to the next level of trying to hold a career together. Most tellingly, he was on the cusp of marriage. Peter Parker was the nerd who grew up to be cool. He was my hero.

Somewhere along the line a batch of creators about 10-20 years older than me took the reins at Marvel Comics, and they started to fidget. They started to mess. They looked at the world of Peter Parker, adult human, and it didn’t please them. They wanted the Spider-Man of their youth, the 1970s apartment-dwelling single guy Peter Parker. It was the only way to make the character compelling, because it was what had compelled them.

And so it was done. Gone was the wife, the maturity, the history. Back was the apartment, the social group, the teenage angst. Peter Parker was converted to Peter Pan, the golden rule of both being that he can never, ever grow up.

Late last night, news broke that the movie rights to Spider-Man had been untangled and handed over to the custodians of the Marvel Cinematic Universe. Rather than continuing to let the character toil in a siloed Sony-verse, the powers that be orchestrated a byzantine bargain. Spidey could now come out to play alongside Iron Man, Captain America, and the entire MCU gang.

And rightly so. Miles Morales is a cool character, rife with the energy and spirit and newness that Peter Parker once embodied in the 1960s. To see Morales brought to the big screen would be awesome.

There’s a tremendous opportunity before Marvel (and Sony, too). They have a unique chance, perhaps a once-in-a-lifetime chance, to recalibrate an iconic character for a new time, a new generation, and a new world. Typically passing the baton from one generation to the next in superhero stories involves death. I’m hoping Marvel takes a decidedly DC approach and instead of death, presents us with a legacy.

Let Peter Parker grow up. Let him marry Mary Jane. Let him leave the halls of high school and the cries of goblins and Gwen forever behind. Let Parker grow, and let us grow with him. Doing so both enriches the history of the character and solidifies his future.

Peter Parker was meant to grow up. We just need to allow him to do so. It’s a fitting arc for a character who has brought so much joy to readers (and viewers) over the years. Let Peter get old. Let Peter be happy. Let Miles Morales soar.