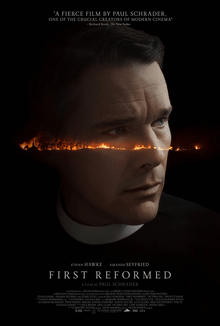 Ethan Hawke cuts a lean figure in the equally lean and potent First Reformed from writer and director Paul Schrader. Hawke stars as Rev. Toller, a pastor tending to the needs of a cold little church in a cold little town in upstate New York. The parish has its 250th anniversary celebration approaching, and multiple sets of prying eyes from the mothership megachurch organization (think corporate bureaucrats more than priests and nuns) are focused on all aspects of the event. It quickly becomes clear that Hawke’s Rev. Toller is something of a black sheep in the church hierarchy, and his direct supervisors are anxious about his ability to successfully pull off the proceedings. Then there’s also bits about the role of God, the Iraq War, fear, alcoholism, suicide bombings, capitalism run amok, and the fate of the entire planet.

The ‘70s grit and localized urban violence found in Taxi Driver are gone, because, well, they don’t really exist anymore. But Schrader deftly weaves in the many frightening aspects of today’s global level of violence- extremist groups, the online world, substance abuse, suicide, greed, corruption, and a general pervasiveness of amorality- in the same way he channeled freaks, weirdos, and revolvers in Taxi Driver. The chief antagonist, if it can be called that, is the idea of a global climate crisis. Indeed, though the story is set in a small church in a small town with a small cast of characters, Schrader presents something out of a superhero plot- the destruction of the world itself – and makes it real. He’s mostly successful.

Some bumps in the road: First Reformed often feels cut a bit too close to the bone, like the version we’re seeing on screen is either the first draft or the 151st, a combination of either whittled away too much or not flushed out enough. The chief victim of this is the character played by Amanda Seyfried. Seyfried acts with a kind of earnestness that is captivating, but unfortunately she’s not given much of a story on her own. Her husband is a troubled environmentalist radical. Why exactly she is with him, given her lack of radicalism on the subject, isn’t really explained, nor are her reasons for seeking the help of Hawke’s character explored to any depth. She exists primarily as a prop for Hawke’s Reverend Toller to explore pretty typical yearnings of a middle-aged man. Hawke and Seyfried have a real chemistry together, and it’s a shame it doesn’t get more time or substance.

What Schrader does accomplish though is pretty remarkable in the sense that it attempts to both boil the ocean and thread the needle at the same time. Schrader takes a deep breath and goes for big, weighty subject matter questions, but where those aspirations threaten to slip over the edge into arthouse pretentiousness or, well, preaching, the movie instead remains ever-so precariously grounded and more importantly, interesting. This is in large part because of the restraint of the script, which although hollow in a few spots, is also sharp and quick enough to not spend too much time dwelling on any one of the many aspects it tackles. In a word, it is restrained, giving the audience plenty to think about but never so much that it blocks the very strong performances of the cast. Hawke in particular gives a lean and mean performance, one of the best of his career, which serves to make the film’s high-concept statements and philosophical tangents more earthy and real. The ensemble of supporting cast members, including a standout serious turn from actor/comedian Cedric the Entertainer as a megachurch management drone, also does wonders in bringing Schrader’s kaleidoscopic view of a world on fire into a crystalized whole.

Schrader’s script for Taxi Driver, brought to life by Martin Scorsese and Robert De Niro, swept up many strands of the violent America of the 1970s into one strange package, a fierce and pointed thrust that spoke directly to its time. First Reformed does much of the same with a very different world of the 21st century. Schrader reminds us of the toll of recent times, from terrorism to the wars to the current state of anger and fear-driven politics, to the absence of grace, compassion, and civility. There are swings toward the abstract, poetic, and nearly psychedelic that won’t sit well with those looking for a traditional drama yarn.

But those choices aside (or because of, depending on your tastes), First Reformed is a powerful piece of filmmaking that takes the template of a singular story and uses it communicate multiple complex feelings on life, God, America, the world, and more (as if that’s not enough), and showcases truly excellent performances from its cast. It’s an angry, powerful, and violent film, much like Taxi Driver before it, but at a modulation and scale that brings the frenzied state of the 21st century’s hyper-polarized, information overload world into a cool and clear focus. There’s a lot to process and it’s not for the faint of heart, but for those unsettled by the trajectory of current events, Schrader’s First Reformed will hit home in ways that are scary, moving, and fascinating.