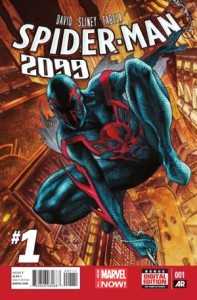 Miguel O’Hara swings back into his own monthly title this week in Spider-Man 2099 #1, with none other than co-creator Peter David returning to handle writing duties. The first issue marks a serviceable yet somewhat muted return for the character, with flat plot points and occasionally stilted artwork weighing things down but enough action, humor, and hints at future conflicts to make Miggy’s second act worth taking in.

The key lacking element may also be the distinguishing feature of this book’s title — “2099”. The comic could easily be titled Miguel O’Hara 2014. The question is, will that status quo be able to deliver the same level of excitement that the character’s future past previously did, let alone sustain a unique identity in a fairly ruthless comic marketplace?

Read my full review at Kabooooom.com