“This is it. They’re making a new Star Wars.”

This was me, to my parents, my friends, the disinterested kid next to me on the bus, our local postal worker- everyone I knew. In my hands, the novel “Star Wars – Heir to the Empire” by Timothy Zahn, its foil embossed cover shinning like a holy beacon from the rack at a Central Florida Albertson’s supermarket. The message it portended: Star Wars was back. 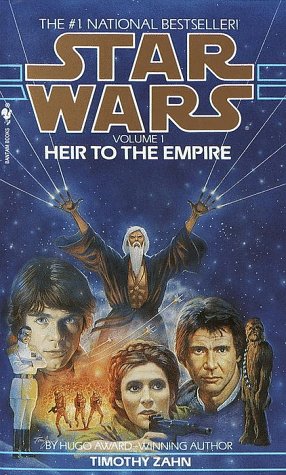 The year was 1992. The last Star Wars movie, Return of the Jedi, had been released nearly a decade prior. I happened to be born right smack in the middle of Star Wars’ cultural nadir. For kids my age, born as the original trilogy just started to wind down, Star Wars was something you had to dig for. We subsided on older kids’ abandoned action figures, creased comic books, and battered VHS tapes. Our introduction to the saga came via Ewok Adventures TV movies and some cameos on Muppet Babies. We missed the initial wave and weren’t privy to the blockbuster hoopla. But Star Wars somehow lingered and even with its output running on fumes, it managed to capture our imaginations.

The older kids in my neighborhood wore jean jackets emblazoned with heavy metal band patches, snuck Camel cigarettes behind suburban sheds, and loved the shit out of Star Wars. It was through their ceaseless quotation and references that the next gen, the home viewing gen, caught the infection. Like Ben Kenobi’s with mullets and earrings, they passed on the lore.

Return of the Jedi was the first Star Wars movie I saw, taped off of Boston’s Channel 5. It’s a testament to the strange genius of George Lucas that jumping in at Episode VI could completely hook and enthrall me. It’s the perfect serialized adventure: the movie-in-a-movie of Jabba’s palace, the hints at a much larger drama, and the most epic of epic third act conclusions. I subsided for years of ROTJ alone, and didn’t see Episodes IV and V until much later. Once I did catch up, I remember foolishly asking a store clerk if they had Episodes 1 through 3 (pre-Internet days). They didn’t exist yet. My heart sank. That was it.

Then came 1992, and with a crisp new paperback, Star Wars suddenly seemed to roar back to life. I had just moved from Massachusetts to Florida, and Heir to the Empire gave me solace and shelter from the alien culture of good ol’ boys, gators, and retirees. Here was a world that made much more sense, that seemed more noble and exciting and somehow more true than the wastes of subdivisions and strip malls.

Heir to the Empire kicked off a decade of new Star Wars content that’s come to be called the “Extended Universe”, or EU. It was massively imperfect, supremely geeky, and essentially amounted to commercial grade fanfic. There were terrible books, but also some genuinely great contributions from a host of talents, Zahn top among them. Dark Horse comics gave us the dark and beautiful work of Tom Veitch and Cam Kennedy. Kevin J. Anderson’s novels took the story even further, and artists like Christian Gossett delivered really compelling new takes on the art and design of Star Wars. LucasArts video games brought the Force to life on the digital plane. This second wave of Star Wars grew and grew and kept on growing, all without a new movie or TV show. Looking back on it, it seemed to manifest out of nothing more than a collective dream for more Star Wars.

The Dark Ages of Star Wars reached its peak in 1996 with a multiplatform event called Shadows of the Empire. It was a novel, a comic series, a video game, a radio drama, a series of toys- everything you would expect from a Star Wars movie, just without the movie. It was the culmination of this lost decade, a show of force for the continually surviving and thriving demand for all things related to the galaxy far, far away. In retrospect, it was pretty weird. We took what we could get.

What came next is well known and borderline infamous. Lucas rereleased his original trilogy, now with some wacky CGI testing inserted, for the benefit of the VHS kids like me. It was cool seeing Star Wars with a packed theater crowd, less cool seeing computer-rendered alien lips assault my eyeballs in Return of the Jedi’s new dance number. It was all a dry run for the prequels, of course. I skipped school and saw Episode I three times opening day. Star Wars, finally, was back.

Except it wasn’t, really. From Jar Jar to sand dialogue to cinematography that looked more like video game cut scenes than film, the prequels didn’t come close to matching those dreams we harbored for the long drought between Jedi and The Phantom Menace. In a way we had all created our own adventures in the Star Wars vacuum, and it was impossible for Lucas to top it. Our expectations were high and the execution was low to middling. The match up made the time before “more Star Wars” seem almost quaint.

Here we are yet again. It’s now 2015, a year previously reserved for post-apocalyptic robot movies that is somehow reality. And just like in 1992 and 1999, we’re on the verge of “more Star Wars.” Can we expect this first Lucas-less entry to match the original trilogy? It would probably be foolish to do so (again). But if Star Wars is about anything, it’s hope. I’ll be there opening night, eyes turned upwards, hoping it to finally see it.

This is it. They’re making a new Star Wars.