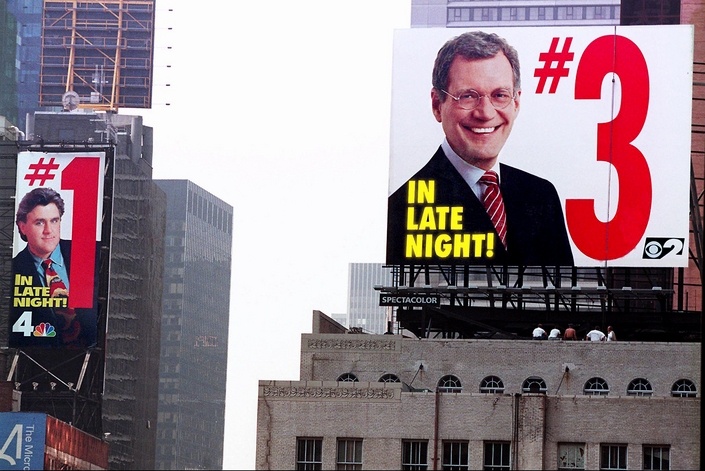 Tonight is going to be so weird. The Post-Letterman Era is upon us.

I discovered the David Letterman show when I was 8 or 9. It was summer. Grandpa left the TV on after another broadcast of The Tonight Show starring Johnny Carson wrapped up from Burbank. The TV blinked over to a completely new scene. It was neon and dark and bombastic in that unmistakable way that only New York City could be. This angry guy came on the stage looking like he wanted to smash through the glass and fight someone, backed by a raucous band that looked like they belonged in a Star Wars cantina. Cut from commercial break, they’re throwing stuff off the roof– and getting away with it! It was all slightly terrifying. I couldn’t look away.

Coming of cultural age as Carson retired (Grandpa taped that whole last week with a kind of disbelief hanging over him, odd now to be in that position myself) and Letterman/Leno tussled to inherit his throne was a unique vantage, turning what should have been just showbiz fodder into a heightened emotional experience. I wasn’t alone clearly, it was a seismic event shared by millions. Dave’s jump to CBS wasn’t a TV deal, it was a revolution. I started watching with fervor in my middle school years and never stopped. Letterman has been my nightly ritual for decades, and on any given day was often the only bit of TV I watched.

Sitting in the audience of the Ed Sullivan theater as an “adult” (twice!) was a surreal demystifying of the TV magic. Everything was smaller. Somehow it felt farther away from the action than ever, yet the peek behind the curtain of Oz was unforgettable. The band was incredible. Viva Paul.

Whether it was called Late Night or The Tonight Show or The Late Show, Letterman’s rock n roll circus of misfits was the only show that mattered, serving as hub, cultural oasis, and refuge. It was the Big Show from the Big City.

Dave Letterman signed off last night with a tight program that hit all the bases. He didn’t unfurl in a blubbering mess (as seems to be the norm). Instead he kept it together and saw the thing off in top form, the All-American master of ceremonies. The last of the 20th century broadcasters.

There will never be another show like Letterman’s Broadway big top. Goodnight to Dave, Paul, and the dozens upon dozens who brought us with them into the Big Show, night after night after night. I’ll miss it enormously and I honestly have no idea how I’ll get to sleep from here on out.

A lifetime wasn’t enough. So long and thanks for all the canned ham.