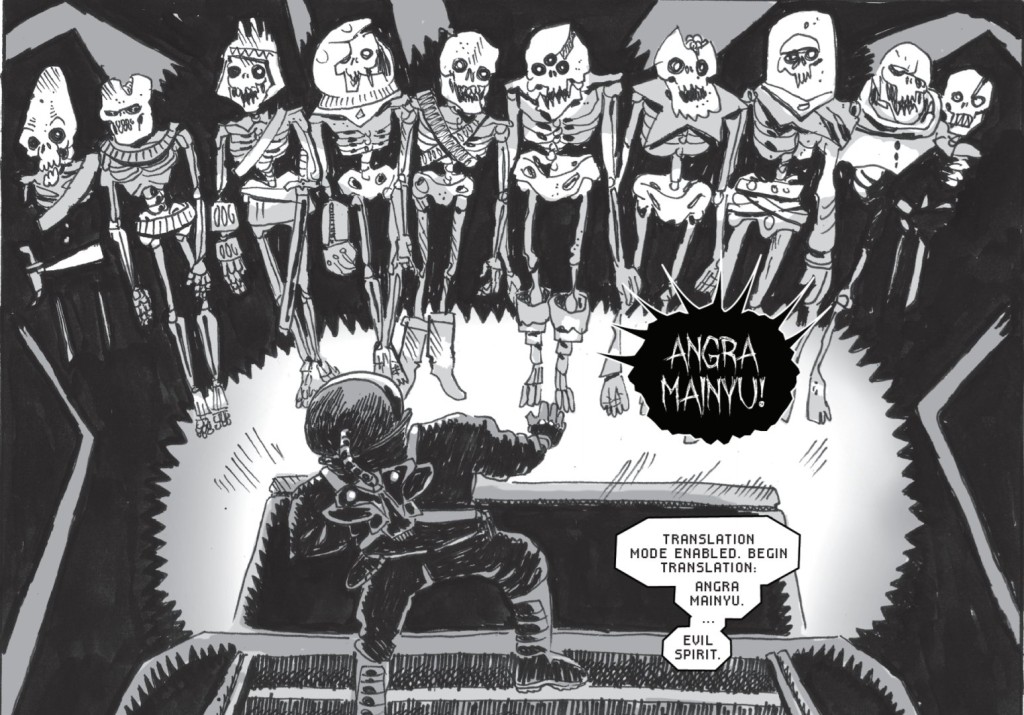 Welcome to the Land of the Living, Crypt Zero

All living things share the same plodding movement. It’s unmistakable. From a spider wobbling out from under the floorboards to a lion chasing down a gazelle. We’re no different. Energy in motion, yes, but also matter robotically propelled through 4D timesoup motion pictures that our brain puts together as “reality.” In this sandbox, whatever it may be, we play out the same old schoolyard dramas. Babes in the dirt. Fussing, fighting, and generally making a mess of everything.

As we gracelessly tumble through existence, certain acts have replayed themselves, over and over, maybe for even longer than we know. All our science, all our religion, and there’s still a gnawing sense that the real secrets of our Whateververse are locked away in some dusty old attic. Somewhere out there waiting for us to find it. And so we go. We move. Energy in motion, matter plodding, grace be damned.

From a machete in the jungle to a robot probe around an icy moon, humans tend to engage in activity rather unlike any other mammal. Squirrels don’t write operas, and they sure as shit don’t calculate insertion orbits. It’s not just intelligence though. This has nothing to do with evolution. This has to do with heart (the concept, not the organ). This is about soul. This is about the unifying homesickness that seems to permeate all human endeavors. Where the hell are we trying to go? Why have we always felt so out of place in our own home?

We keep ourselves busy with philosophy and technology and sport and war, but when we stare down reality it all seems like noise, a falseness so obvious that its persistence almost entirely proves that other forces at work. The Argentine writer Jorge Luis Borges wrote “Almost immediately, reality yielded on more than one account. The truth is that it longed to yield.” Like the cat that ate the canary, we can’t seem to quite fully suppress the urge to spring the trap, to let the formulas and scriptures fall aside for a bit and realize, with wonder, that we will only ever understand what we see, and what we see is undoubtedly an illusion.

Is this all too much for a comic book? Probably. Maybe. I dunno. I have stones in my kidneys keeping me up way too late and, you know, the witching hour and all that. Maybe I’m loopy on grinding, ever-present pain. Maybe I just want to reflect the strangeness that I feel when I close my eyes onto you, knowing that you have felt it too, dear reader, of my time or thereafter.

Which brings me to the space ghost. Ghosts are real, of course, because we say they are, just like mountains and tables and overly complex tax forms. None of it is anything without a set of eyes to define it as being something. None of it vibrates without with a hand on the quantum guitar, plucking the strings by an eternal campfire. Why write a story about a space ghost? Because true power hardly ever really dies, because the worst ideas of humanity have somehow stuck around, even as we build better televisions and create tastier permutations of chicken. And because some poor sucker always ends up springing the trap (sorry, Commander Dal). I used a ghost because nothing quite shows the illusion more than the illusions we create ourselves.

Shakespeare was fond of ghosts. Hamlet’s ghost dad told him this:

“But that I am forbid
To tell the secrets of my prison house,
I could a tale unfold whose lightest word
Would harrow up thy soul, freeze thy young blood,
Make thy two eyes, like stars, start from their spheres.”

Ok. Crypt Zero. This is my second independently published comic. I think of myself primarily as a writer, but my wife reminds me that putting together a project like this is above and beyond pounding out a script, so I guess I’m a publisher too. Joining me on this adventure once again are artist Rob Croonenborghs and letter Micah Myers, the creative force that brought you my first comic, Voodoo Bird.

When I reached out to Rob about doing another story together, he mentioned a fondness for drawing human faces and staying away from mech and tech. So I sent him a script featuring a (then) faceless person in a spacesuit doing all sorts of stuff that could be construed as “sci-fi.” Rob gave the script a read though, and thankfully he saw through the surface trappings and found something. Rob’s contributions to the story are enormous- giving the somewhat sternly scripted Dal a personality, a face, and piercing eyes. He took a story set on a barren and dead environment and filled it with energy and life. I’m so grateful for Rob’s work in bringing this to you.

The script also called for a somewhat funky distributions of text, interlacing spacesuit translation voiceover with untranslated alien-speak. Micah Myers gave these words the necessary treatment, and the book would not have worked at all without this.

Thank you for leading the way, and for sending the elevator back down.

I don’t have enough words to thank my wife Jessika. Whenever I doubted, whenever I questioned, whenever I balked at the costs or time or effort, her response was steadfast- “Do it.” I couldn’t have with you.

Final thanks to you, dear readers. Your support is everything.