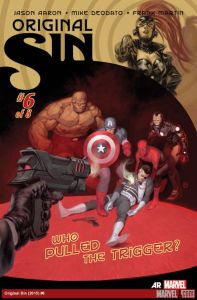 The Watcher has no eyes. Original Sin has no heart.

Perhaps the more accurate word is core. Writer Jason Aaron is clearly in touch with the various Marvel Universe characters that populate the pages of Original Sin #6. He takes special care with Nick Fury Sr., the book’s de facto star, peppering his dialogue with references and asides that mine the character’s rich history. So there’s some heart. What’s missing is the electric pulse that makes event comics so fun.

After kicking off with two tantalizing issues and delivering a big shock moment at the end of issue three, Original Sin has substantially bogged down. The slowly unfolding plot just doesn’t have enough gas left in the tank to make issue six much of a compelling read. Things sputter along. Nick Fury’s deconstruction continues. The Avengers assemble without so much as an exclamation point. It’s that kind of issue.