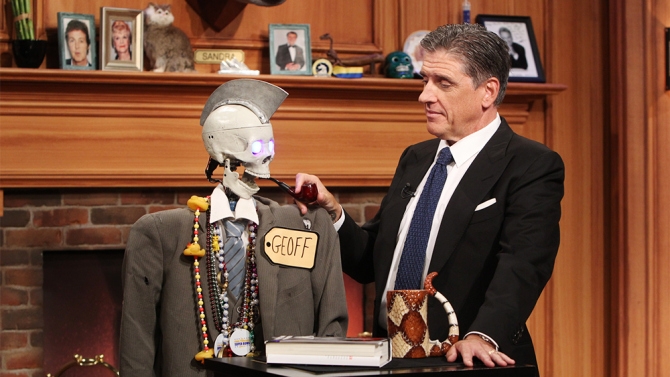 I’ve found Ferguson to be wildly uneven– sometimes a madcap carnival leader, other times so sullen and offbeat it was hard to find a footing as a viewer. Overall, I’ve enjoyed his show if for no other reason than it being so unpredictable. He brought the right kind of energy to 12:30, but didn’t seem to have the desire to institutionalize it. He’s told Variety that he’s been thinking about stepping down from “The Late Late Show” for a couple years, and actually made a decision before David Letterman announced his retirement on April 3.

I’m sure there’s more to the story than Ferguson just wanting to “do other things.” The network did just recently move him into a revamped and expanded studio, redid the show’s opening credits montage, and upgraded Ferguson’s “sidekick”, Geoff the Skeleton Robot. Sadly, I don’t think the ratings were ever going to go up for Ferguson and his misfit crew, and realistically the numbers were likely a notch below the goals of CBS executives. Ferguson claims otherwise, saying in his announcement that 10 years has been enough.

Whatever the case, better for Craig to leave on his terms. Operating under the bubble of Letterman’s later years, Ferguson managed to craft something entirely different and unique on stodgy old network television, and that’s a rare accomplishment. I have no doubt he’ll be on TV again, I just hope the robot and the horse tag along for the ride.

Brittany Spears / Addiction Monologue
http://youtu.be/7ZVWIELHQQY
I saw this one at the time of air, and was struck when by Ferguson’s candor and directness. “This is me, ok? Me and you,” he says at one point. Ferguson took his platform and did something real with it. Not something you see on TV everyday.

Best of Geoff the Robot
http://youtu.be/vO002BMXiKE

Best of Craig and the Ladies
http://youtu.be/mZ50wAUN-0A