All that, plus, like, normal life, which is boring and hard. We’ll skip that.

Both Crisis Vector #1 and #2 are 100% complete, printed, and exist in this crazy world! For reasons that I can’t even really understand, I put both of these books into production at the same time, like Richard Donner filming Superman 1 and 2 at once. It was nuts. I know that’s not the most nuanced explanation of the process, but it’s accurate. It was like juggling two balls on fire while riding a unicycle and dodging a rabid bear, but that’s all past now. Now we breathe. We reflect. We shill.

This was a big project to pull together. Issue 1 is 24 pages, full color, no ads. Issue 2 is even longer, clocking in at 28 pages. My goal was to amp up production value as much as I possibly could, and that includes first and foremost the artwork from Samir Simao (#1) and Ross Taylor(#2), and also the ever-professional lettering and design work of Micah Myers (both issues). The end result is something that I’m proud of– you’ll be hard pressed to find an indie comic that looks or feels better, and from a production standpoint this project sits on the shelf next to the latest Image book without issue. And it was all done independently. Get your copies of both issues here: 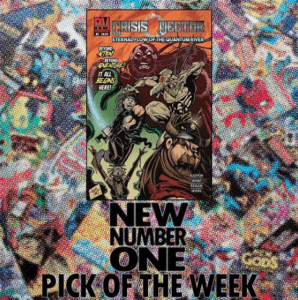 Crisis Vector #1 was recently featured on Pierce Lydon’s excellent podcast New Number One. When Pierce invited me to submit Crisis Vector #1 to the show, I was excited…and more than a little bit nervous! Pierce is a veteran comic journalist who writes for Newsarama and brings a ton of knowledge about the art, craft, and world of comics to the table. I was truly surprised and honored to have our lil’ indie book not only reviewed alongside books from top-tier publishers, but also earn the coveted Pick of the Week designation. Listen to the podcast via the link below, and be sure to subscribe if you enjoy thoughtful and informed comic reviews.

The third and final issue of Crisis Vector is in production. The core story has been bouncing around since before I finished #1 and #2. Unlike the first two scripts, which basically fell out of the ether onto the page, #3 has been more deliberative. The beats are all laid out, start to finish, but I keep tinkering with each section, experimenting and reforming. The main thing is, I don’t want the compiled Crisis Vector TPB collection on the shelf and find that it’s missing the heart that was the inspiration for telling this story all along. So I’m spending a bit more time, now that I’ve let it all hang out in #1 and #2, to make sure I’m putting some soul into the panels of #3. I’m excited for you all to see the final version in the months ahead.

After stories about black magic phone apps, talking space ghosts, and the Saturday morning cartoon explosion of Crisis Vector, the time has finally come– a Radical Visions superhero! The right blend of ideas came to me and the time feels right. Stay tuned for more soon.

I’ve outlined a 100 card set to tie into Crisis Vector. The next phase is to experiment with some different gameplay mechanics and figure out what’s fun and also what captures the spirit of the comics. But yeah. Going YuGiOh on this. More things to not sell, whoo!

I recently attended a first year convention in Nashua, New Hampshire. It was a nice little show in a comfortable hotel setting- no concrete floors or red tape to navigate. I didn’t sell a ton, but it was a lowkey and enjoyable experience. Billy Tucci, the creator of Shi, tabled across from me, and it was cool to think of his explosive success with Shi in the ’90s and how it was independently published. An inspiration when thinking of the future of Radical Visions.

13 is unlucky so I’ll say I celebrated my 12+1 anniversary with my wife Jessika. We were crazy kids runnin’ down a dream. Now my hair is grey and my tolerance for humanity is at a nadir, but she hasn’t changed the locks yet! I’m lucky. 🙂 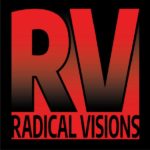