Marvel’s Mighty Mutants in Search of a New Now 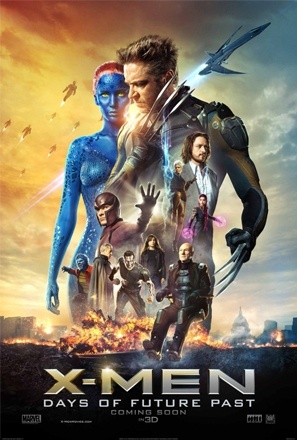 X-Men Days of Future Past is one of the better X-Men movies, but that doesn’t make it great. The film strives to serve two masters, simultaneously acting as both a sequel to 2011’s excellent X-Men First Class and as a consolidation / mea culpa for the original batch of X-Men films produced by 20th Century Fox since 2000. The end result is a movie that feels spread thin.

The story splits its duties between two time periods — a dark, dour future (everyone dresses in black, because it’s a dark future) and a cartoon version the ’70s, complete with Laugh-In style Richard Nixon and a lot of wide neckties.

Neither period feels particularly “real”, but they are entertaining. A dizzying smorgasbord of mutants and powers are on display, the special effects are excellent, and the potential train wreck of a time travel storyline somehow manages to tie itself together by the end. Reaching the end, however, feels laborious more than once during the two hour running time.

The biggest downside to Days of Future Past is its lack of an identifiable present, a “now” to plant a footing in. The dark future is packed with action, but devoid of much else save for bouts of fear and panic. Patrick Stewart’s older Xavier chews the scenery here, force-feeding gravitas into the surrounding plot purgatory. The 1970s thread is a bit meatier, but still scattershot in its approach to building a narrative. There’s humor and kitsch (hey look, a waterbed!) awkwardly blended with a good deal about Vietnam. Throughout the rapid fire of tonally erratic vignettes, neither past nor future adds up to a cohesive whole.

The movie is bolstered by a choice few scenes of real characterization that sneak in between the leather-clad futureshock and Munich-meets-Austin Powers ’70s. James McAvoy injects much-needed humanity into the story as struggling X-Men founder Charles Xavier (his future counterpart, Professor Xavier, is played by Patrick Stewart). We meet Xavier drunk, depressed, and disillusioned by the war in Vietnam–because it’s the ’70s. Tropes aside, this incarnation of Xavier is by far the most intriguing and fully-formed to date. McAvoy inhabited the character with equal enthusiasm in First Class and, although underserved by the DOFP script, once again brings a real sense of ownership to the role.

The same can be said for all the returning First Class cast members. Jennifer Lawrence plays Mystique (nee Raven), one of the many antagonists challenging the X-Men. She has a deep personal history with Xavier stretching back to childhood, and also happens to be the lynchpin in the film’s wacky time travel plot. Lawrence doles out a bevy of ferocious kicks and flips in many of the Days of Future Past‘s standout action scenes. When not engaged in combat, her character serves as an emotional bookend for Xavier and her journey mirrors his own.

Michael Fassbender is stern and simmering in his return as Magneto, the mutant Malcolm X to Xavier’s Dr. King. Fassbender ramps up to the role of true villain, and does so with cold calculation that unfolds in brutal spectacle.

McAvoy and Fassbender make a great pair of dueling generals. Their tension propels much of the conflict in DOFP, but too often ends up feeling cut short by the multitude of plot threads competing for screen time. With mutants a-plenty in both past and future, Fassbender and McAvoy simply aren’t given enough time to match what we saw from them in First Class.

That’s the crux of Days of Future Past. By mashing together the stellar First Class cast with the legacy characters of the previous X-Men movies, much of the gains made by the prequel are thrown out in wholesale. A large contingent of the First Class cast isn’t featured (most notably, January Jones’ Emma Frost), presumably to make room for more Hugh Jackman and Shawn Ashmore’s Iceman (if that name doesn’t ring a bell, you’re not alone). That trade-off makes for a strange step back, or perhaps laterally, for a franchise that gained a new lease on life and landed an impressive ensemble of talented young actors with First Class. Considering that both of Hugh Jackman’s solo Wolverine films landed flat and the last X-Men movie to meet critical acclaim was 2003’s X2: X-Men United, it’s a bit weird to deviate away from compelling actors like McAvoy, Fassbender, and Lawrence in favor of cast members from the best superhero movie of the first Bush administration. It makes you wonder, who was the movie made for?

Which brings us to director Bryan Singer. He famously delivered a competent X-Men movie on a tight budget way back in 2000, then followed up with a sequel that was an even bigger hit. He hasn’t directed an X-Men film since 2003, and Days of Future Past is filled with the glassy-eyed energy of homecoming. Singer plays a good deal of inside baseball, using too much of his time to showcase moments that call back to the franchise’s earlier days. There’s a certain level of presumption that these moments should mean anything in the new context he’s created. Combined with other elements from the earlier films (stilted dialogue,uneven editing), DOFP is too weighed down by its own baggage to be able to fully liftoff.

Another wobbly pillar in DOFP that keeps it from reaching mega-movie status like the Avengers is the lack of a distinct and cohesive team. The X-Men comics represent the ultimate in dramatic superhero team storytelling, featuring members as diverse as the population itself. There’s some glimpses of the X-Men as a team in DOFP’s future timeline, but none of the characters do much of anything other than fight, making it difficult to form a connection with this squad. The core “team” of the film, if it can be called such a thing, is primarily made up of Xavier, Hank “Beast” McCoy, and Hugh Jackman’s Wolverine. That triumvirate of three white guys completely misses the scale and diversity the X-Men epitomize in comics.

That’s a lot of criticism directed toward DOFP for not being great, but it’s still a pretty good superhero action flick. The mutant-powered combat is inspired and exciting in parts.

One of the highlights of DOFP is the all-too-brief introduction to the character Quicksilver, played by Evan Peters. Like McAvoy, Peters noticeably outshines those around him and commands arguably the most memorable scene in the movie. Regrettably, and inexplicably, the character is whisked away as quickly as he appeared. Peters is a real scene stealer and his absence is felt once removed.

Peter Dinklage also steals the spotlight for a time as Bolivar Trask. Trask has constructed mutant-detecting weaponized robots called Sentinels and engages in a desperate bid to sell his program to the U.S. government. Dinklage’s Trask is tenacious and determined, pursing his goal with a single-minded intensity. Motivated by his strong beliefs, Trask makes a fine villain for the X-Men.

Despite it’s time travel leanings and problems with sustaining dramatic tension, Days of Future Past does do a good job of tying together all the disparate threads of its story. It’s third act is an intense series of action set pieces that definitely entertains. Shallow as they may be, mutant heroes like Bishop, Blink, Sunspot, and Warpath all look cool and kick a good deal of butt. Hugh Jackman continues to be serviceable as Wolverine and the new status quo set by the end of the film opens up intriguing possibilities. For now, maybe that’s as good as it gets from Hollywood when it comes to the X-Men.

GRADE: C+
COMMENT: “The great X-Men movie still remains to be made, but I’d probably watch this again on blu ray.”