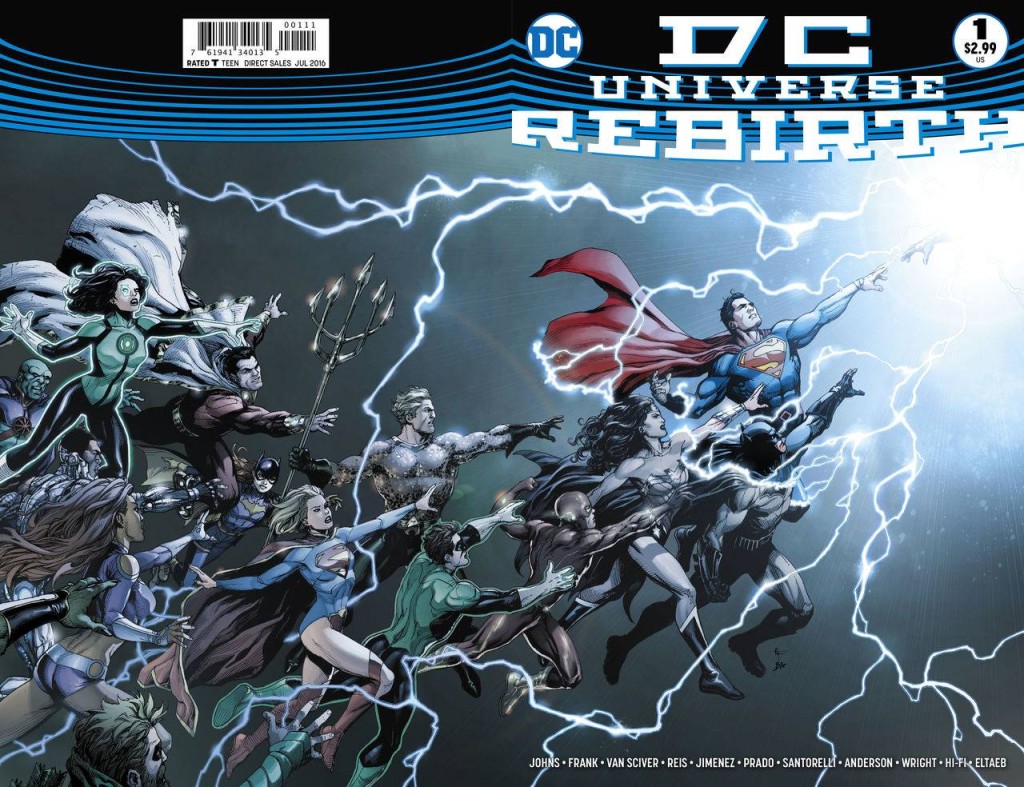 I’ve left my house at midnight for some ridiculous things before- movies, video games, unwise culinary selections- but Tuesday marked the first time I did it for a comic. The book in question is DC Universe Rebirth #1, the much-hyped reset of the DC Comics universe under the hand of writer Geoff Johns and a stable of DC’s top artists.

DC has a long and byzantine publishing history, and where some might see that as a hindrance, time and again the most powerful and impactful DC storylines have leveraged that history for a unique and distinct advantage. Classics like The Flash of Two-Worlds and Crisis on Infinite Earths used DC’s twisty history to produce engaging comics that were both accessible to new readers and rewarding for longtime fans. Every comic is somebody’s first, and the best DC comics throughout the years have recognized this while simultaneously having the confidence to intrigue new readers with snippets of the DCU’s rich history.

When I think of DC, I think of family. More so than with Marvel’s dynamic band of loners and misfits, DC’s heroes form a pantheon, with mantles passed down from generation to generation. Superman, Supergirl, Superboy, hell, even Krypto the Superdog. Batman, Robin, Huntress, Nightwing, Batgirl. Reading a DC comic feels like being drawn into an extended, multi-generation family drama. The DCU is like Gabriel Garcia Marquez’s 100 Years of Solitude with continuing echoes of themes and legacies, just with more capes and fights.

I was a Marvel kid throughout my childhood, with my comic-mania eventually spilling over into DC in the early ‘90s. As I was going through those middle school wasteland years of loneliness and doubt, the warmth of the DCU was a welcomed and comforting portal of escape. Here was a world where time had its own pulse, where the Flash from my grandfather’s era ran side-by-side with his successor’s successor, and even some new kid from the future named Impulse. It was a place where Clark Kent’s inner voice could make sense of even the most cosmic malady, even his own death. It was a place where new heroes like James Robinson and Tony Harris’ Starman could stare googly-eyed at Batman and the Justice League, marveling at these living legends just like we were through the pages.

Which brings me to Wally West. In the 1990s, writer Mark Waid and artist Mike Weiringo’s run on the Flash grabbed me and didn’t let go. The book centered on Wally West, the Fastest Man Alive. Wally was perhaps the best single representation of DC’s tradition of legacy. He was originally Kid Flash, the sidekick of Barry Allen, who was the Flash from the dawn of the Silver Age right up to 1985’s Crisis on Infinite Earths. Barry Allen died saving the multiverse, and Kid Flash stepped up to take his mentor’s mantle. Wally West was the only Flash I knew. Sure, the character had some history behind him, but it was nothing that barred me from enjoying his adventures. Mark Waid utilized Wally’s past to its fullest, taking the Flash from a somewhat one-dimension hero to a unique, fully-realized character with a rich supporting cast that included other speedsters from the past, present, and future. For a kid steeped in X-Men comics and Spider-Man, there was nothing prohibitive about the Flash and his history. In fact, it made for an even more rewarding reading experience. The Flash wasn’t really a superhero book, it was a tale about time, loss, and finding your place in the universe. It was a story about family.

When DC decided to wipe the slate entirely clean in 2012, I lauded the move. After all, having the imagination to take risks and try new things is what the comic book medium is all about. The initiative, called The New 52, jettisoned DC’s decades of history and legacy for something new. While The New 52 produced some interesting highlights, the chief of which being Scott Snyder and Greg Capullo’s historic run on Batman, on the whole it was severely lacking. Instead of building a new history, The New 52 produced far too many vapid, seemingly meaningless stories with ill-defined characters operating under muddy motivations. Rather than a fresh start, with each passing month it began to feel like an empty promise, an unfulfilled opportunity. No clean break is without causalities. Wally West was one of them.

The only Flash I knew was simply tossed aside. In many ways, Wally was marked. His history was so tightly intertwined with the continuity that DC was overtly dumping that it made it pretty impossible to introduce him in the sterilized New 52 format. The Flash was now Barry Allen, and that was that.

Comics are weird. They’re junk entertainment on the surface, but through the years upon years of publishing, funny things have and continue to happen. When the comic-bug latches onto you, you enter the stories and they enter you. The characters become familiar. You recognize their voices. You know their lives. Something is shared between creator and reader, something unlike anything else in the world of pop culture. Comics grow with us, mirror our own lives, serve as time capsules for our memories. Sitting down to a read a comic is an act of meditation. Flipping open the cover of something as brazenly optimistic as a superhero comic book is an act of hopefully rebellion in a world that openly stomps on such notions like a discarded cigarette butt. It hurt to lose Wally. It hurt to lose the DCU. It felt like the loss of a family. It felt like all those moments were lost.

So Tuesday. Midnight. The lonely days of middle school far behind, part of my own personal convoluted continuity just like the chapters of your life make up your own. I venture to my local comic shop to once again embark on this bizarre act of hopeful rebellion. To once again flip open the cover and look for something to believe in. And there it was, a voice. A familiar, lost voice, suddenly back in a flash. Geoff Johns writes DC Universe Rebirth as a Wally West story, and it instantly made all the difference in the world. For me, the cold veneer of The New 52 instantly shattered with the simple words “My name is Wally West. I’m the Fastest Man Alive.”

Through narrative both poignant and engaging, Johns brings back the voice of Wally and the voice of an entire lost generation of comics. Johns and the art team present Wally as barely there, a phantom of the speed force not understanding what is happening, but knowing that he has to try. And try he does, attempting to make contact with the New 52 version of the DC roster- his old friends, teammates, family. It doesn’t work. Wally is on the brink of oblivion, and facing certain death he shows the most stellar aspect of his character- gratitude. His final words are “Thank you for an amazing life.”

But then, a spark. A moment. Barry Allen reaches forward and grabs Wally. He pulls him from the edge of disintegration, and brings him back. “Wally,” he says, “How could I ever forget you?”

It’s one of the most beautiful moments I’ve ever read in a superhero comic. Johns is clearly making a statement. What were we thinking, leaving this behind? How could we throw this away? How is there not room on the boat for all of this?

Reading comics is an act of hopeful rebellion. It’s a war. It’s a war against a world seemingly purpose-built to extinguish hope. In a war, you leave no one behind.

“Every second counts” is a refrain in the issue, and it rings true on this side of the page as well. All those seconds, those moments spent engaging in this inexplicably surviving (and thriving!) form of storytelling, they count. They matter. It’s the most hopeful of statements, and a central theme of this work. DC Universe Rebirth is as much a manifesto of belief as it is a comic story. Stories can save lives. Stories can save the world. Stories matter. Every story counts.

How this issue will play with new readers, I have no idea. I’m obviously as intertwined with the DCU’s history as much as its most convoluted characters. I wrote letters to Aquaman, for Christ’s sake. That’s a connection impossible to sever. I hope (that word again) there’s enough in Rebirth to intrigue, to make a new reader wonder “What’s this all about?” the same way Crisis and Mark Waid’s Flash did for me all those years ago. I have to think that there’s a whole new generation of readers out there looking for something to believe in that might find it here. And I hope DC, when faced with moments of doubt or indecision, looks to this issue for direction. Geoff Johns has provided the template. He’s written the articles of federation for the heart and soul of the DCU.

How could we ever forget you, DC?