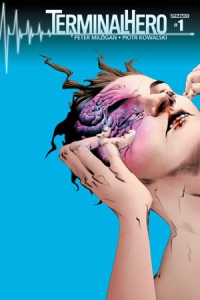 In the afterward of Terminal Hero #1, writer Peter Milligan describes the book as unlike anything he’s previously written. That’s mostly true, although traces of Shade the Changing Man are present. It’s a weird comic by a weird writer with some weird art, and it’s definitely unlike anything else on the stands.

The story is a strange blend with many interesting elements swirling about–a protagonist diagnosed with a terminal brain tumor, undercurrents of sketchy biomedical experimental treatments, a somewhat posh cast of London-based medical professionals. Also in the mix are bizarre superpowers, demonic flashbacks, and other supernatural nuggets.