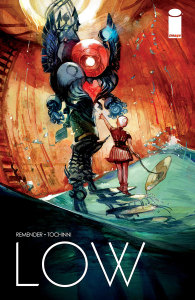 There’s a scene in Woody Allen’s Annie Hall where a young version of Allen’s character Alvy Singer is taken by his mother to the doctor. Young Alvy is depressed and has grown apathetic toward his 9 year-old responsibilities. His reason- the universe is expanding and will someday break apart into nothingness.

“He’s not doing his homework!” his mother pleads to the doctor.

Rick Remender taps similar themes in Low, his new creator-owned project with artist Greg Tocchini. Set in a sci-fi future where the Sun has expanded and threatens to scorch the entire Earth out of existence, Low tells the story of the Caine family as they search for new beginnings and grapple with the same questions of purpose Alvy Singer wrestled with in his Brooklyn doctor’s office. Why build anything, why strive for any meaning, when the world’s just going to burn up?