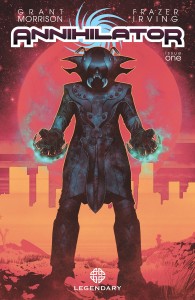 Grant Morrison’s done this all before, you know.

The whole “metafiction starring a none-more-mod writer with a dark and magical alter-ego/creation slicing through the tenuous membrane dividing the real world and the world of creation because what is reality anyway, mannnn” thing. It’s been done.

Morrison did it perhaps most notably in the The Invisibles, with King Mob aka Gideon Stargrave aka Grant Morrison himself standing centerstage for all to see. That was nearly 20 years ago (or longer? Not looking it up out of fear).  The reality-bending Mob/Stargrave/Morrison mashup itself drew heavily from Michael Moorcock’s Jerry Cornelius character, first published in the era of Vietnam and Watergate.

The point here is that Annihilator #1, the new comic from Morrison and artist Frazer Irving, is on its surface not particularly groundbreaking. Like a new album by an old band, Morrison’s most familiar chords are struck and well-trod beats reverberate throughout. Yet Annihilator takes hold with the jolting energy of unexpected audio goodness from a group you long gave up on, and the old notes somehow sound better than ever before.

In many ways, Annihilator plays like a greatest hits anthology of Grant Morrison’s storytelling, boiled down and stripped to its bare essentials. To extend the music analogy a final time, this feels like a Rick Rubin production– raw, primal, awesome.

Although the territory is familiar, each page of Annihilator falls into place as an astonishing surprise of either design, composition, color or layout. Frazer Irving creates a rich wonderworld with work that matches the bizarre potency of Morrison’s writing. Issue one represents the first chapter of a graphic novel, to be sure, and in a way Irving’s painted artwork recalls Morrison’s breakout U.S. hit graphic novel Arkham Asylum with Dave McKean. And so we return and begin again.

Annihilator #1 introduces Max Nomax, beetle-helmed outer space renegade with police, or more accurately enforcers of Vada, on his back. Nomax journeys to Dis, a strange outpost that’s part tomb, part science colony, and part prison orbiting the massive black hole at the center of the Milky Way galaxy, the Great Annihilator. Flamboyant and villainous, like a rockstar Lex Luthor, Nomax gleefully acclimates to the starkly nihilistic surroundings of Dis and even in exile has a master scheme working. 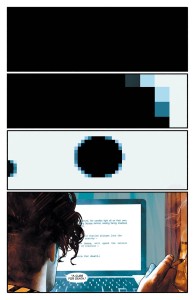 Counterbalancing the darkness of Dis is, naturally, Hollywood– the hazy black hole at the center of modern Western culture whose gravity pulls on all things with equal force as the Great Annihilator. Our lead here is Ray Spass (pronounced “space”, as in outer) a screenwriter riding on the fumes of past success and struggling with his latest assignment, a horror tale set in space featuring none other than…Max Nomax.

Until we do it all over again next month, of course. Ah, comics.